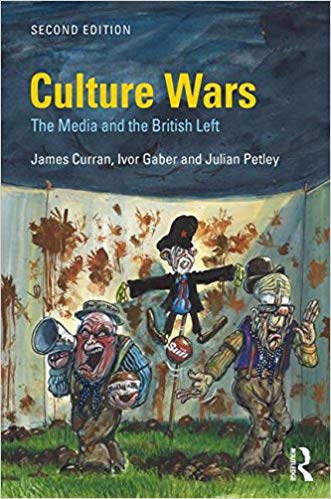 Culture Wars: The Media and the British Left  by James Curran, Ivor Gaber and Julian Petley, fully updated second edition (first edition 2006) Routledge
Culture Wars investigates the relationship between the media and politics in Britain today. It focusses on how significant sections of the national press have represented and distorted the policies of the Labour Party, and particularly its left, from the Thatcher era up to and including Ed Miliband’s and Jeremy Corbyn’s leaderships. Revised and updated, including five brand new chapters, this second edition shows how press hostility to the left, particularly newspaper coverage of its policies on race, gender and sexuality, has morphed into a more generalised campaign against ‘political correctness’, the ‘liberal elite’ and the so-called ‘enemies of the people’. Combining fine-grained case studies with authoritative overviews of recent British political and media history, Culture Wars demonstrates how much of the press have routinely attacked Labour and, in so doing, have abused their political power, distorted public debate and negatively impacted the news agendas of the public service broadcasters. The book also raises the intriguing question of whether the rise of social media, and the success of its initial exploitation by Corbyn supporters, followed by Labour as a whole in the 2017 General Election, represent a major shift in the balance of power between Labour and the media, and in particular the right-wing press. Culture Wars will be of considerable interest to students and researchers in the fields of media, politics and contemporary British history and will also attract those with a more general interest in current affairs in the UK.
ENDORSEMENTS
‘We may be living through a media revolution but this brilliantly forensic book shows that one constant factor still applies – the relentless anti-Labour bias in most
newspapers and their continuing influence. Culture Wars is a must-read for all those seeking to make sense of UK politics. Indeed, it is impossible to make sense of what
is happening and what has happened without reading it.’
Steve Richards, Political columnist and broadcaster
‘This outstanding new edition of the classic text Culture Wars revisits and analyses the complex relationships between the media, journalism and politics in the UK. The authors’ focus is on press (mis)representations of the Labour left in the context of radical changes in the Labour leadership, the diminished influence of print media and the growth of social media and fake news. They address provocative and significant questions concerning the shifting influence of politicians, citizens and media in public debates about gender, sexuality, race and environmental policy in an age of digital journalism and media. James Curran, Ivor Gaber and Julian Petley’s eloquent, authoritative and forward-looking Culture Wars is essential reading for everyone interested in the significant role of news journalism in democracies.’
Bob Franklin, Foundation Chair in Journalism Studies at the University of Cardiff
“Every media student, every working journalist, everyone who believes facts are more important than fake news, should read this book. In forensic detail, it exposes the way in which Britain’s mainstream newspapers wilfully deny the truth to their readers by promulgating propaganda in the pursuit of their own political agendas”.
Roy Greenslade, Emeritus Professor of Journalism, City, University of London (and former Daily Mirror Editor).